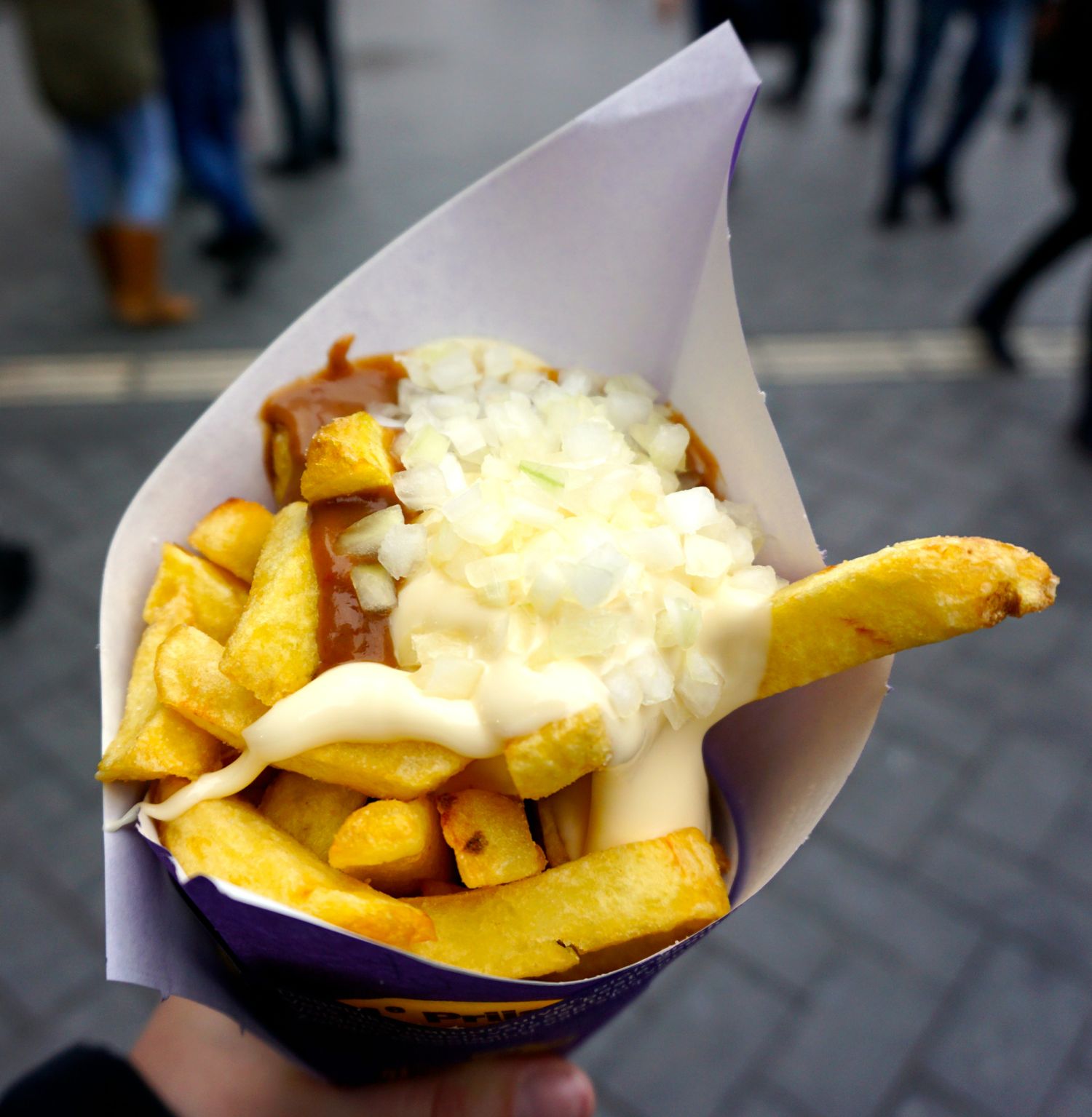 Chances are you’ll find that you are hungry in Amsterdam . Even if you aren’t visiting the ‘coffee houses’ (an activity sure to give you the munchies), a long day biking around Amsterdam, wandering its canals or getting lost in its museum is sure to whet your appetite. Hence I felt like a ‘What to Eat in Amsterdam’ post was an essential one.

I arrived in Amsterdam without much knowledge of Dutch cuisine but fortunately I left a little more educated. I attempted to try as many local dishes as I could during my short four days in the city.

Obviously this list is by no means complete, even with my appetite I couldn’t have tried everything Holland has to offer in four days. But hopefully it’s a starting point for a culinary education of the Netherlands.

Holland is famous for it’s cheese and you’ll find cheese shops on every street of Amsterdam. Here you’ll find huge wheels of cheese but don’t worry- you don’t need to buy cheese by the wheel. The cheese stores can cut you whatever amount you would like (although some do have a modest minimum purchase amount). In many stores you can also sample the goods or even buy small plates to eat in store.

Outside of the cheese stores you’ll also find cheese on the menu of most restaurants, particularly in beer house where cheese is the regular accompaniment to an afternoon glass of beer.

To be perfectly honest, I find Dutch beer slightly disappointing after the magic that is German beer. But I have meet some people that prefer the beer in Holland or at least think it’s a fairly good drop.

The Netherland’s most famous beer is of course Heineken, which is certainly one of the European beers that is regularly sold in Australia. But be sure to also try different beers that you might not get as easily in your home country. The taste was a bit too strong for me but many of the seasoned beer drinkers on my bike tour loved the Brouwerji beer.

Traditionally bitterballen is a ball of beef stew/gravy that is crumbed and then fried. They are super delicious and like most of Amsterdam’s food they are typically a bar snack.

Whilst the traditional bitterballen are amazing I also tried some gourmet ones at the Food Hallen. The Food Hallen was one of my favourite spots in Amsterdam. It’s basically a food hall with lots of gourmet stalls selling incredible food from all around the world. You’ll also find some great wine bars, gin and tonic bars, and some excellent music. The atmosphere here is incredible and it’s definitely more of a local spot than a touristy destination.

From the ‘De Ballen’ stall I bought the bitterballen tasting plate which included all five of their special bitterballen. A normal ‘rund’ bitterballen, one with a Chorizo filling, one with Bouillabaisse, one with special Dutch cheese, and one with truffle. They were all extremely delicious and went so well with the great glass of red I ordered at the wine bar.

Technically, Hollandse Nieuwe refers to a specific type of Herring, the first herring of the season. To be dubbed ‘Hollandse Nieuwe’ it can only be caught between mid May to mid July.

In Holland it’s served raw (although it has been salted) with onions and pickles. If you are going to do as the locals do you are meant to eat it by dangling it above your mouth and eating it all at once. I wasn’t quite ready to eat it this way so I used a fork. This one of the more adventurous Dutch dishes but I found it to be really yummy. The combination of the fresh fish with the onions and pickles was superb.

The best and most famous place to eat this dish is at Stubbe Haring which isn’t too far from the main train station.

If you feeling slightly less brave you can also order this dish in bread which might make it easier to eat and/or more appealing for you.

French fries are a staple of the Amsterdam diet. You’ll find stores all over the city with a huge variety of different sauces.

However the most local topping for your fries is the ‘oorlog fries’ which translates to ‘chips with fries’. It’s fries topped with satay sauce, mayonnaise and raw chopped onions. Trust me on this; the combination is heavenly!

These were a very cheap dish so I had them many times during my four days in Amsterdam but the best I had were definitely at Manneken Pis (like the famous statue in Belgium).

Dutch pancakes might be one of the Dutch dishes that you have actually heard about before. In Australia you’ll find Poffertjes or ‘dutch pancakes’ at most of the small country town markets.

My mum used to have a stall right near to the dutch pancake stall at our local market when I was little and after constant pestering she left one day with a dutch pancake griddle and the secret recipe.

Let’s just say that dutch pancakes were the highlight of a sleepover at my house when I was growing up!

Hence I couldn’t wait to try them myself in Amsterdam. However the small sized ‘poffertjes’ aren’t the most popular pancake in Amsterdam. Most of the pancake house serve a different, bigger size pancakes. So after many failed attempts to find them I looked to google for some advice.

I got directed to a café right near the Tulip Museum and Anne Frank House. I expected to find a small café or tea house but instead I found a bar. I was a little surprised but trusting my instincts I asked for a menu and found the poffertjes on the menu.

They were super delicious and exactly how I remembered them from my childhood!

Holland is scattered with sweet shops where you can pick from any number of delicious looking desserts and pastries. But the most Dutch of these pastries is the apple pie.

I’m a huge fan of any kind of apple dessert and this apple pie was no different. You won’t be complaining about this pie not having enough apples in it. The Dutch apple pie is always full of huge chunks of apple which is what makes it so good!

So I’ll admit this isn’t a typical Dutch dish but I’m including this place on my list because it was one of my favourite places to eat in Amsterdam. When I needed a break from fried food and sugar (which is basically 90% of this list), I headed here to grab a cup of delicious, vegetable filled soup. My favourite was the morocco chickpea soup.

Whilst downtown Amsterdam is full of coffee houses of the marijuana variety, you’ll find the real coffee shops and cafes (the ones serving actual coffee!) in the uptown part of town, particularly around the Rijksmuseum. I almost thought I was in Melbourne for one second with all the cute cafes that litter this district.

I was particularly excited to find a café that was actually run by a woman from Melbourne called Little Collins (a famous street in Melbourne for all of the Non-Melbournians). Brunch is one of the things I miss most and it was amazing to be able to find a taste of home right here in Amsterdam.

I had the baked eggs with ox-tail, guacamole, sour cream/crème fraiche, corn salsa and corn chips. It was so delicious!

Do you have any recommendations?

If you have any dishes that are must trys for a visit to Amsterdam comment below! Maybe I’ll use them when I return.