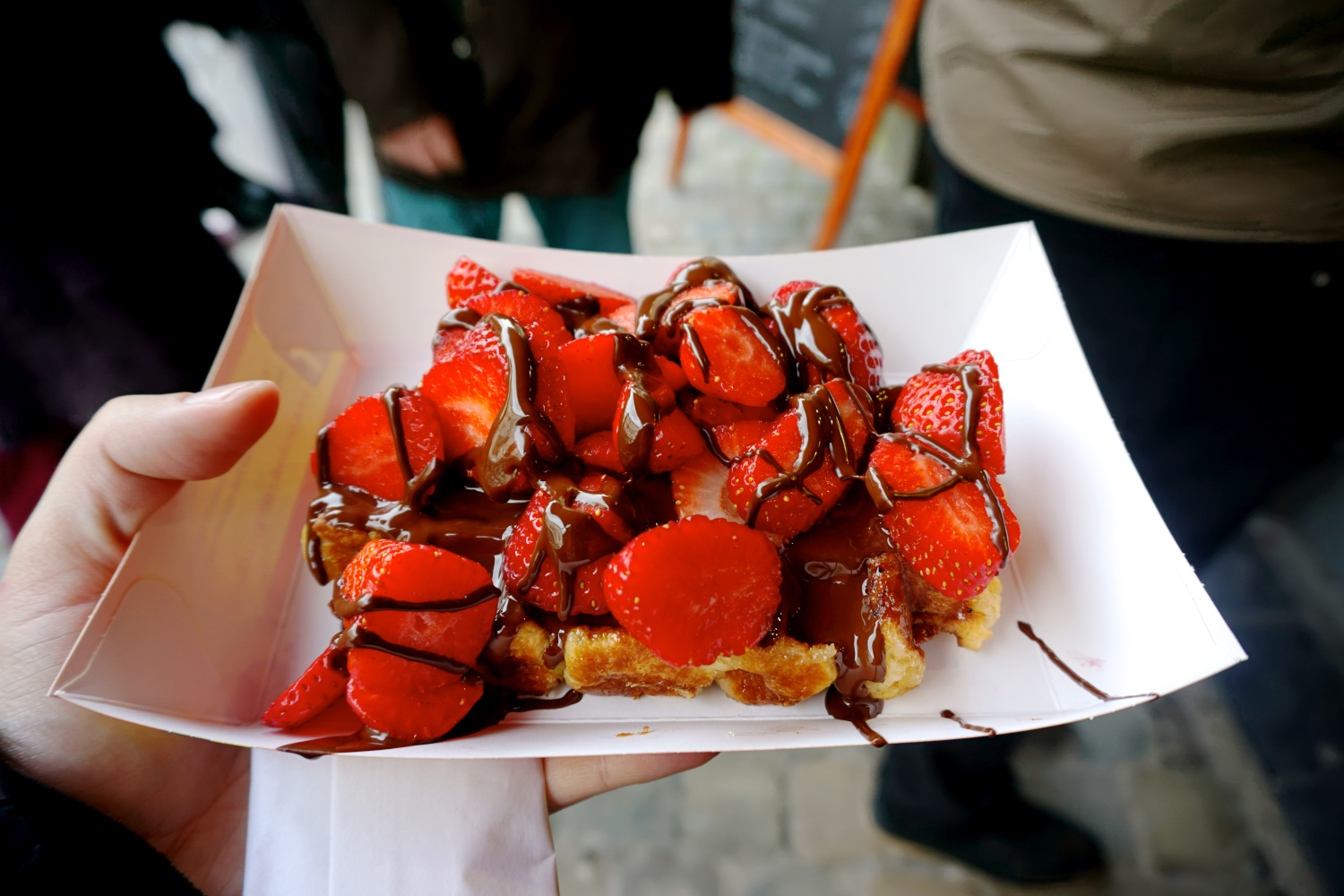 Belgium doesn’t have the greatest reputation as a country to visit. Many people I’d spoken to labelled it boring. They asked me why I was going at all. My usual response to this question?

Despite the critics, I actually had the greatest time in Belgium. And one some of that was the amazing food you’ll find there. Belgium is one of those destinations I’d happily return to just to eat (and drink beer of course).

So here is everything I ate during my four days in the country.

The variety actually wasn’t that huge because by the first day or so I’d already decided what I liked and I tended just to order them again. I was definitely a little guilty of not exploring my horizons and its something on the agenda for when I can hopefully return to Belgium.

As an Australia, I’m not guilty of calling frites ‘French fries’. To us they are just chips. But if you are from North America don’t ever refer to frites as French fries. The reason is because fries were never from France. When the American soldiers were serving in Belgium during the war they discovered how amazing these fried potatoes really were.

Back then they didn’t have google maps. They were pretty close to the French border, heard people speaking French and just presumed they were in France and not Belgium. Hence they are dubbed French fries when all along they were Belgian fries!

I’m usually really careful to take photos of everything I ate but I must confess that almost every time I ate frites I had also drank a little bit too much Belgian beer. The amazing frites place around the corner from the bar area in Brussels was a regular stop on the way home from the hostel.

But Belgian frites are seriously out of this world. I loved the frites in Amsterdam but the ones in Belgian were so much better. Each frites place has a huge selection of fries to choose from. My favourite being a combination of aioli and hot chilli sauce. Make sure you don’t just go to any frites place; the touristy ones are usually putting their frites out of a frozen bag rather than cutting them themselves. So do your research before eating frites!

This is probably one of the lesser known Belgian dishes but actually one of my favourite. It’s basically a beef stew made with beer that is served in many Belgian bistrots. The beef in one just fell apart and the sauce was so delicious. It almost has a creamy texture without an obvious signs of cream.

I ate mine at Le Cirio bistrot in Brussels. It was one of my favourite places, mostly because of how awesome it was inside. Stepping inside is almost like stepping back in time. It’s decorated in the pre-war style, and I wouldn’t be surprised to find out that the furnishings have been there for a hundred years.

The standard way to cook them is ‘marinara’ which are basically just mussels steamed with a few simple seasonings like salt, onion and garlic. But you’ll also find places that have a range of different moules dishes including ones with tomato based sauce, ones made with cream and ones made with chilli.

My love for moules is probably the reason I didn’t try everything I wanted to try while in Belgium. I just kept ordering them.

In Brussels I had amazing moules at Le Zinneke and Chez Patrick.

You haven’t visited Belgium if you haven’t eaten Belgian waffles. Every second shop in the centre of Brussels seems to be serving them but almost all of them won’t offer Belgium’s best waffles. These shops are targeted at tourists. The waffles are often precooked and then reheated and topped with every topping under the sun including fruit, chocolate, nutella, icecream and marshmallows.

I had one of these touristy waffles and whilst it wasn’t terrible it definitely wasn’t what I was expecting from a Belgian waffle.

But on my second last day in Belgium I finally struck gold in Bruges at Lizzie’s Wafels. To get a good waffle you usually need to not get it takeaway. The best ones are in tea shops or self confessed waffle houses.

You need to be able to watch them make it fresh in front of your eyes. The one at Lizzie’s Wafels was incredible and I had it exactly how it is traditionally meant to be eaten; with just some butter and icing sugar. Although I was slightly envious of the people at the table next to me who had ordered it with fruit salad.

Belgium is famous for its chocolate and I definitely had the best chocolate of my life while in this country. Sorry Switzerland but Belgium has you beat!

However there are so many chocolate shops in Brussels, so it can be a bit hard to work out what is good (hint Godiva is not!). You can try a piece at every chocolate house (for less than €2 depending on the place), or you can do what I did and book a chocolate tasting tour.

Due to a lack of other bookings I was lucky enough to be the only person on this tour. The company I went with have a strict no cancellations policy so I ended up having the tour guide all to myself.

The chocolate tour started with a couple of tastings at the lower end of the Belgian chocolate scene. We then got to go back to the workshop and I got to make some chocolates for myself.

After making as many simple chocolates as I could we also were shown a demonstration about making filled chocolates the traditional way, something that is rarely done now but takes a lot of skill. I was even lucky enough to squeeze some of the caramel filling into each filled chocolate. These were super delicious!

Before continuing on with our chocolate tour, my guide decided a beer break was in order (classic Belgians) so we stopped off at a bar for a couple of drinks.

The chocolate only got better from there. We went to some truly brilliant chocolate shops. At each place I tried about three types of chocolates, with some of my favourite being the chocolate filled with earl grey tea and another filled with mint.

My best piece of advice for chocolate tasting is to go for the dark chocolate. It’s the best way to actually taste the quality of the chocolate. In contrast white chocolate is mostly full of sugar!

I also love the hot chocolate that you can get in Belgium. Some of the chocolate shops serve hot chocolate as well. I particularly loved this one near the square where they hand you a cup of hot milk and a stick of chocolate which you then stir into the drink. So delicious!

There was also this one from Lizzie’s Wafels that was a chocolate flower that you drowned in the cup of milk.

Of course it wouldn’t be a round up of Belgian food without a mention of beer. Belgian beer is hands down the best beer in the world. Whilst countries like Germany have delicious traditional beer, Belgium does so many experimental things with their beers.

I spent lots of nights drinking far too much Belgian beer and everything I tasted was good. I drank coconut flavoured beer out of a coconut shell, really strong and dark beer, and lighter wheat beers. If you want to try Belgian beer, the best place to go is to Delirium, which holds the world record for the most different varieties of beer sold in one place. The catalogue of beers is a thick book! You’ll find everything there!

The beer tasting tour was really informative; we learnt about how certain beers are created, where they are created and the politics of Belgian beers. We also tasted so many different beers from cherry and sour cherry beer, to really strong beer made by Belgian Monks which is referred to as Trappis beer.

Needless to say, I boarded my flight to Manchester that night feeling more than a little tipsy!

Belgium is such a foodie destination. If the places haven’t convinced you to pack your bags and visit, I hope the amazing food can!