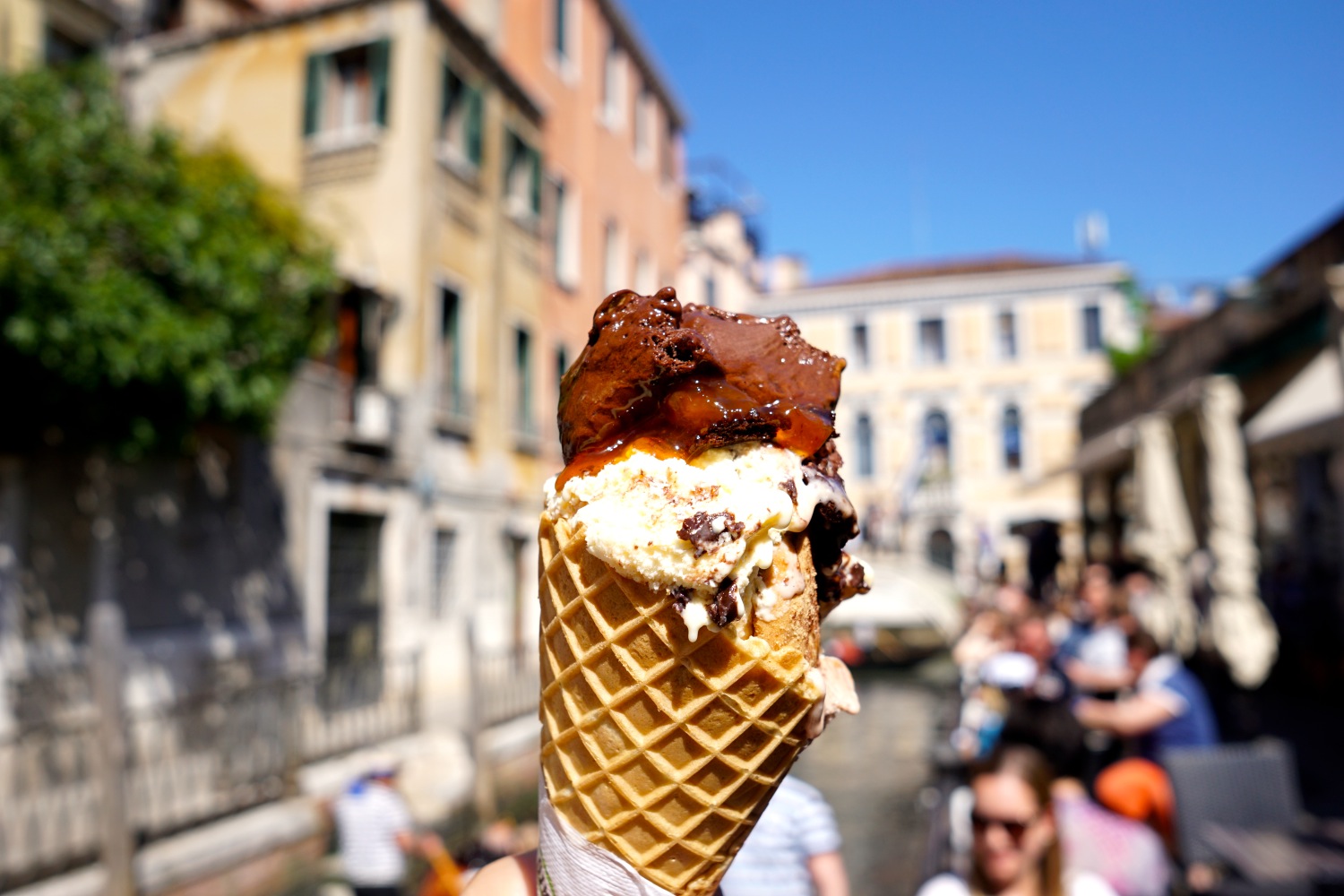 I recently spent two months living in Florence , Italy and I hate to admit that I didn’t sample as much Italian food as I expected to. After four months of being on the road and constantly eating out, I really enjoyed having a kitchen again.

I love to cook; I was in serious need of some vegetables (something distinctly missing from most traditional Italian cuisine), and after long days at university the last thing I wanted to do was go out and eat.

But that said, I wasn’t going to completely ignore the Italian cuisine. Every weekend when I went and explored another part of Italy, the first thing I did was search out good Italian food.

What to Eat in Italy- Starters and Light Dishes

This simple Italian dish is one of my favourite ways to start a meal in Italy. The standard bruschetta is basically just tomatoes and olive oil on crunchy unsalted bread.

Some restaurants add cheese (mostly mozzarella) and basil, whilst at some ‘speciality’ bruschetta places you’ll find them loaded up with everything from anchovies to prosciutto to gorgonzola.

Whilst this is a great starter it can also be a delicious and light lunch. Halfway through our hike in the Cinque Terre we stopped for bruschetta in Corniglia and bruschetta was the perfect light lunch before starting the rest of the hike to Vernazza.

Pate is traditionally a French dish, but a particular type of pate made from chicken liver is typical in the Tuscan region. They pair it with typical Tuscan unsalted bread and serve it up as a starter. It’s seriously delicious- but you’ll have to be a pate fan to like it. It is one of those acquired tastes.

Polenta with Cuttlefish and Squid Ink

Polenta is a dish typical of Northern Italy- you’ll find it a lot in places like Venice and Verona. Whilst it is served in a variety of ways, one of my favourite polenta dishes was this polenta with cuttlefish and squid ink dish I had while in Venice. The combination of the polenta and the saltiness of the cuttlefish was superb.

Florence was home to the best sandwiches I have ever eaten. It was lucky that we were living a half an hour away from the centre of town, otherwise I probably would have eaten Panini all day everyday. Panini is a type of Italian sandwich and its usually filled with typical Italian ingredients; proscuitto, porchetta, mozzarella, tomatoes, eggplant and rocket.

My favourite was a Panini from All’Antico Vinaio in Florence. The bread is freshly made in house (if you are lucky it might be hot) and it only costs €5 for a huge Panini filled with so much meat. My go to fillings were gorgonzola, truffle cream, rocket and prosciutto. It was seriously out of this world- I’ll be dreaming about that panini for a very long time!!

Also I don’t actually have a photo of the Panini itself, only the store because every time I got one I was far too keen to eat it to remember to take a snap!

I had this magical dish while staying in Nocera, about half an hour away from Naples- the pizza capital of Italy. Coccoli are known by many different names but are essentially pizza dough balls that have been deep fried and then slathered with cheese and tomato sauce.

They were sooooo moorish. I couldn’t stop eating them and they were so delicious. You can also find them plain with just a little salt on them instead of the tomato and cheese.

What to Eat in Italy- Main Dishes

One of Italy’s best known dishes, it would be difficult to leave Italy without eating this dish.

The first thing you need to know about pizza in Italy is that it is very different to pizza you would find in countries like Australia and the US. Instead of putting a thousand different ingredients on the base, Italian pizza is simple.

Most pizza in Italy have around 4-5 ingredients max, and the most simple form- a Margarita with just tomatoes and mozzarella is still considered the classic way to enjoy this dish.

The second thing you need to know about Italian pizza is that it isn’t the same everywhere. In most places you might even be unimpressed at best at the pizza. The true place to enjoy this dish is in Naples- the original home of Pizza. Nearby places such as Rome and Amalfi coast might also have good pizza if you make sure you seek out ‘Napoli’ style pizza.

In Florence we found fantastic Napolese style pizza at Mercado Centrale (the Central Market) in the food court on the second level.

Calzone is pizza that has basically been folded before being cooked. It can be stuffed with a variety of fillings including prosciutto, cheese and tomatoes.

What I love about Calzone is that the pizza dough in the middle is never quite cooked, so it has this dough yummy taste. It’s my go to dish when I want a break from pizza!

When it comes to Italian pasta, gnocchi is my favourite. It’s a bit different from normal pasta in that it has one extra ingredient; it’s made with mashed potatoes, flour and egg. If made correctly it’s pillowy and soft and seriously delicious.

A typical way you’ll find it served in Italy is with gorgonzola cheese. It’s seriously delicious but very filling and rich. Best to pair it with some sort of salad!

This is definitely a dish to eat in Italy but I have to admit that I didn’t eat a good one the whole time I was in Italy. My mum’s partner is Italian and his mum (my Nonna) makes the best lasagne. I didn’t find anything that even remotely compared.

I had amazing homemade fish ravioli at a restaurant in Pisa! I love this type of pasta because it’s different from the normal plain type.

This dish from Il Grottino in Cinque Terre was hands down the best dish I ate the whole time I was in Italy. It was mixed seafood that had been grilled in simple ingredients such as garlic, olive oil and salt and then tossed with some spaghetti that had clearly been cooked in some sort of fish stock.

The whole dish comes wrapped in foil because just before serving it is baked slightly in the foil. It was incredible. The seafood was the hero of the dish and it was perfectly cooked, and the amount of flavour they were able to pack into such a simple dish was crazy!

Italy isn’t a stranger to good seafood, especially in coastal areas like the Cinque Terre or the Amalfi Coast. One of the most popular ways to serve seafood is fritto misto- it’s basically a heap of different seafood that has been battered and then deep fried.

You’d expect to it to be greasy and fatty, but all the ones we ate were only lightly battered and super crispy. I especially loved the white bait (small fish) and the prawns in this mix.

It can also be a very inexpensive dish in places like the Cinque Terre which are known to be expensive. We ate seafood cones full of fritto misto for €8 while in Riomaggiore.

Aperitivo literally translates to ‘happy hour’ and its basically starters accompained by drinks. Whilst Aperitivo is traditionally a couple of plates of sandwiches or light starters that you get when you buy a drink, many places have expanded the concept.

For example in Kitsch Devxx in Florence, you can choose one of their many cocktails for €10, which also gives you access to an all you can eat buffet of five types of pastas, pizzas, vegetables, meat, anchovies and other dishes. You can even finish your meal with fruit salad. You’ll find similar deals in most major cities in Italy- just search them out on google.

What to Eat in Italy- Sweet Things

I ate my weight in gelato while I was in Italy. It was incredibly hard to resist ordering one every day- although I did manage to get my gelato consumption down to three times a week. Well expect for my last week in Florence when I realised my gelato eating opportunities were numbered.

There is good and bad gelato in Italy. There are a couple of rules to follow when finding good gelato; don’t eat it from cafes- for it to be good it needs to be sold in a store that only sells gelato, avoid touristy areas where it is super overpriced and prepackaged shit, and avoid any displays that have icecream piled up in huge piles- these are always the prebought stuff.

My favourite places for Gelato in Florence are La Carapina (the pear gelato is out of this world), Gelateria La Carraia, Gelateria de Neri (the cheesecake flavour is delicious) and Gelateria de’Medici.

I’m actually not a coffee fan so tiramisu is not a dish that I actually like. But it is a favourite of many so I couldn’t really exclude it from the list. This dish is lady fingers that have been dipped in coffee and then piled with cream and mascarpone.

This is my go to Italian dessert when eating out. It’s basically a cream pudding that is usually topped with some sort of sauce such as strawberry, caramel or chocolate.

I’ve talked about how much I love semifreddo before. It’s a semi frozen ice-cream type dessert that has been delicious every time I’ve eaten it. It’s something to try!

What to Eat in Italy- What to Drink

Prosecco is the Italian version of champagne. It’s delicious and one of my favourite ways to start a meal. Lots of restaurants will even offer you a free glass on arrival!

I love red wine and Italy is home to some of the best red wine in the world; Chianti. There are also some ridiculously cheap Chiantis that are good despite the price tag. This was my go to drink while in Italy, especially for pre-drinking.

This drink heralds from the north of Italy but has now spread to the rest of Italy. But the North still does it best- I drank the best ones while in Venice and Verona.

Traditionally its a mix of white wine, soda water and aperol (a bitter orange spirit) but many places now switch the white wine for prosecco. Both versions are tasty- especially when it comes accompanied with an olive stirrer.

PIN IT!/SAVE IT FOR LATER