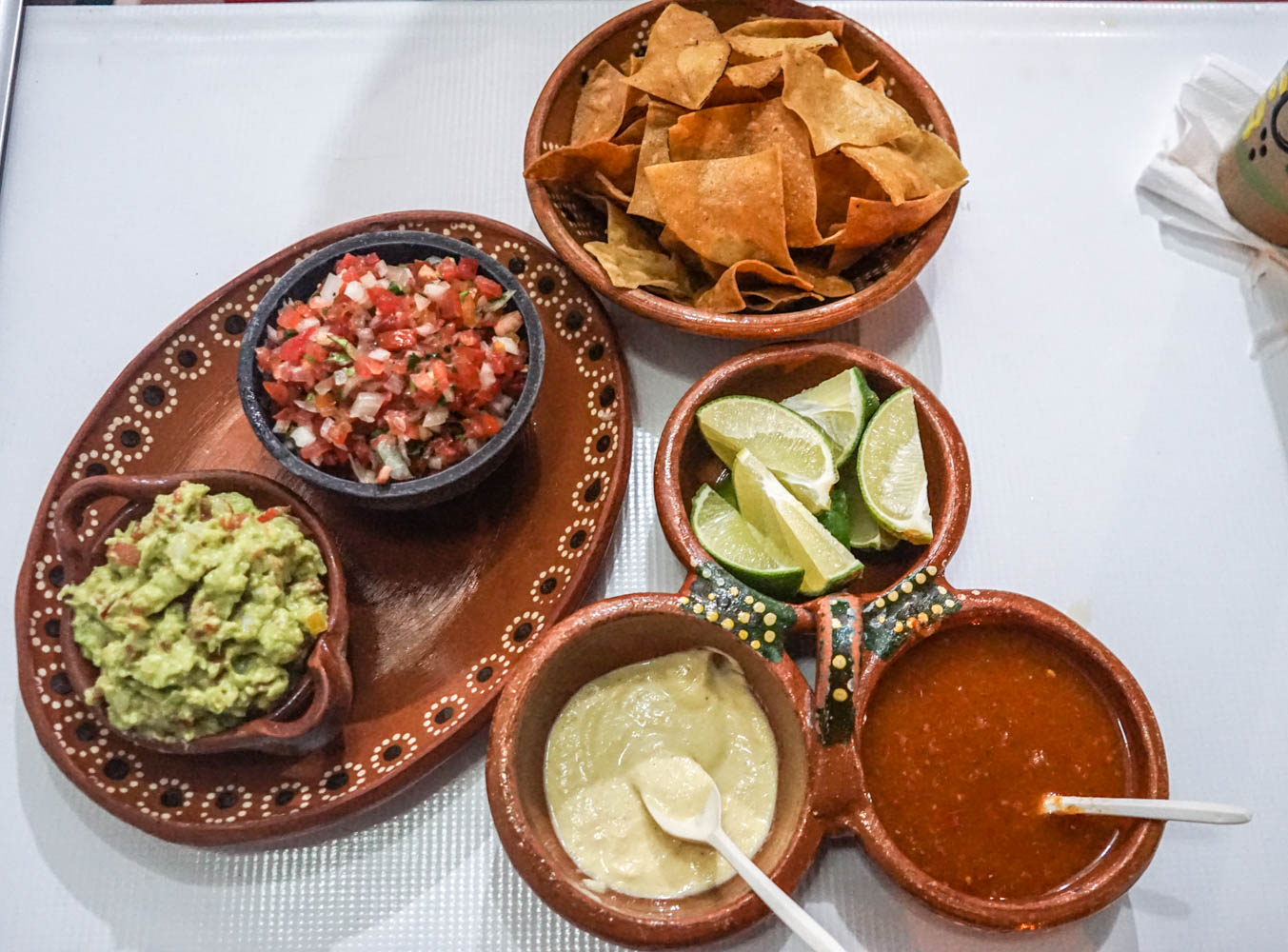 Mexico is easily one of the best destinations for food in the world. Mexican cuisine has been growing in popularity all over the world and almost everyone is now familiar with the amazing flavours and ingredients of Mexico.

I was no exception. In fact, the major reason I decided to visit Mexico was just so that I could eat as much food as possible. It’s one of my favourite cuisines and I couldn’t wait to sink my teeth into tortillas, guacamole and spicy salsa.

Mexico didn’t disappoint when it came to food. But it did surprise me with the wide variety of dishes and flavours beyond what you’ll find in a standard Mexican restaurant in Melbourne. Even though I’ve mentioned restaurants and food in every post I’ve written on Mexico, I wanted to specifically showcase the different dishes that you need to try while visiting this amazing country.

So here is what to eat in Mexico!

Guacamole hands down is the best thing about Mexican cuisine. I’ll never understand those strange people who don’t like avocado or guacamole. I basically lived off it while I was in Mexico. There was very rarely a meal where we didn’t order a bowl of guacamole. In Mexico, it’s always delicious. I feel like Mexicans must grow up learning that perfect combination between fresh avocados, chili, garlic, salt and sometimes citrus. Serve that up to me with a bowl of fresh tortilla chips and I’ll be super content!

Tacos are a serious business in Mexico and they come in a variety of flavours and combinations. My favourite is by far fish tacos- especially when the fish is crunchy and crispy. You’ll also find Taco de Asador- tacos with grilled fillings in them such as beef or chicken that has been sizzled on the grill. I happen to love tacos al pastor which are tacos filled with meat cooked on a rotisserie- kind of like good kebab meat thrown into a taco! Tacos with carnitas also can’t be missed- that’s slow cooked pork that is cooked in fat.  The one thing that you quickly notice about real Mexican tacos is they are less bare then our versions. Most tacos will come simply with the meat inside and then you add salsas and sauces to your liking. It’s great for those that might not like spicy food because there is always a mild salsa option.

Quesadillas are the Mexican version of a toastie! A tortilla is filled with cheese and some sort of meat and then folded up and grilled. They usually come with some sort of salsa or sauce for dipping them into. I preferred them with chicken inside and I usually always ordered some guacamole on the side to slather onto them.

Nachos in Mexico are a bit different to Nachos in Australia or the US. Tortillas crisps are topped with lots of bean paste and cheese. They’ll then heap some meat on the top and a few pieces of salad (tomato and avocado). You’ll need to hunt on the table for some salsa to put it on. I’m not afraid to admit I prefer the version I make at home!

I guess Roast Chicken isn’t something that is considered quintessentially Mexican. But the way they grill, season and roast their chickens is insanely delicious. In almost every town in Mexico you’ll find a little restaurant specialising in chickens that are butterflied, seasoned and marinated and then cooked on a charcoal grill. For next to nothing you’ll be able to pick up a half or full chicken and it will come with tortillas, rice and salsa for a DIY lunch!

This was a new dish for me when I arrived in Mexico. But I soon became obsessed with ceviche. Ceviche is essentially seafood that is cooked in citrus- usually a combination of lime juice, lemon juice and chili. The best ceviche places are always along the coast where you’ll find the freshest seafood. The simple flavours don’t give the prawns, fish and octopus a lot of room to hide- so fresh is best!

Kind of like ceviche but it’s usually prawns or a mix of seafood mixed with this delicious chilli and tomato sauce and lots of coriander. It’s basically a prawn cocktail but with 100x more flavour!

Continuing the seafood theme, you can’t leave Mexico without sinking your teeth into their camarones/prawns. Most restaurants on the coasts have prawns cooked in a variety of ways and I never had a bad prawn. My favourites were by far the coconut battered ones from La Lomita on Isla Mujeres.

You’ll find these all over Latin America. Empanadas are a pastry that is usually made with corn and filled with some sort of meat and vegetables. They are a cheap and quick snack or meal when you don’t have time for a sit-down meal. The Mexican version weren’t my favourites in Latin America (the Chilean ones win hands down), but they are still pretty yummy!

This dish is kind of strange but delicious. Fillings such as meat and vegetables are combined with masa (basically a corn dough) and then wrapped in a banana leaf or corn husk and then steamed. It’s a favourite breakfast dish of many Mexicans and much like empanadas, tamales make a cheap and quick meal. You’ll always find street vendors selling these ones!

Mole is basically just a sauce. It’s a name that can be used to describe a huge variety of Mexican moles/sauces that meat is often cooked or seasoned with. It’s almost like a bit of a curry because mole always comes in a large bowl, with meat swimming in all the sauce. One of the most well-known and eaten mole is mole poblano which is made from cacao bean. Chocolate and meat (usually chicken) might sound like a strange combination but it’s delicious! Mole is most native to the Oaxacan region of Mexico so the best place to try it is in Oaxaca.

Also native to Oaxaca, a tlayudas is the Mexican version of pizza. A crispy tortilla is topped with black bean paste, Oaxacan cheese (a stringy semi hard cheese like Monterey Jack), a grilled piece of meat (usually beef) and some salad (tomatoes and avacados). You’ll find these being sold by street vendors all over Oaxaca. They are super delicious and like much of the Oaxacan cuisine, not something you’ll easily find back at home.

I always try to eat crazy dishes. I ate live octopus in South Korea, and guinea pig in Peru. So in Mexico I decided to try the local delicacy of grasshoppers. To be honest, I don’t think I got the best plate of them at the restaurant we visited. I’m sure they could have been crunchy and better cooked. Maybe if that had been the case I wouldn’t have hated them so much. They were slimy and got stuck between my teeth. But I’m still glad I gave them a go!

Camotes are steamed sweet potatoes loaded up with condensed milk. For something so simple they are so yummy. I loved these for dessert or as an afternoon snack.

Elotes are ears of corn that are steamed or grilled and then coated with delicious toppings such as cheese and lime juice and chili. They were my favourite street food in all of Mexico. I just loved grabbing one in the afternoons when I was feeling a little peckish.

Cacoa beans are grown in Mexico and they are particularly popular in Oaxaca. You’ll find places selling chocolate milkshakes all over the city and they are seriously to die for! Make sure you give them a try.

The Mexicans stole these from the Spanish, but I think the ones in Mexico are the best! I found them not sweet or sugary enough in Spain- often too crunchy and savoury tasting. In comparison the ones I found in Mexico, particularly at El Moro in Mexico City were tossed with sugar and cinnamon and delicious and sweet.

Of course, you can’t leave Mexico without indulging in their local liquor. Tequila is the most known Mexican alcohol, but Mezcal, the more native and less commercialised version is more delicious. I loved visiting Mezcal bars and trying all the different varieties. There is also nothing better than a margarita in Mexico! Finally, Corona gets all the attention but my favourite Mexican beer was Sol!

What Have I Missed?

I think you could live in Mexico for years and still not try everything the country has to offer in terms of food. Are there are must eats you would add to this list? Comment below and I’ll add them in.