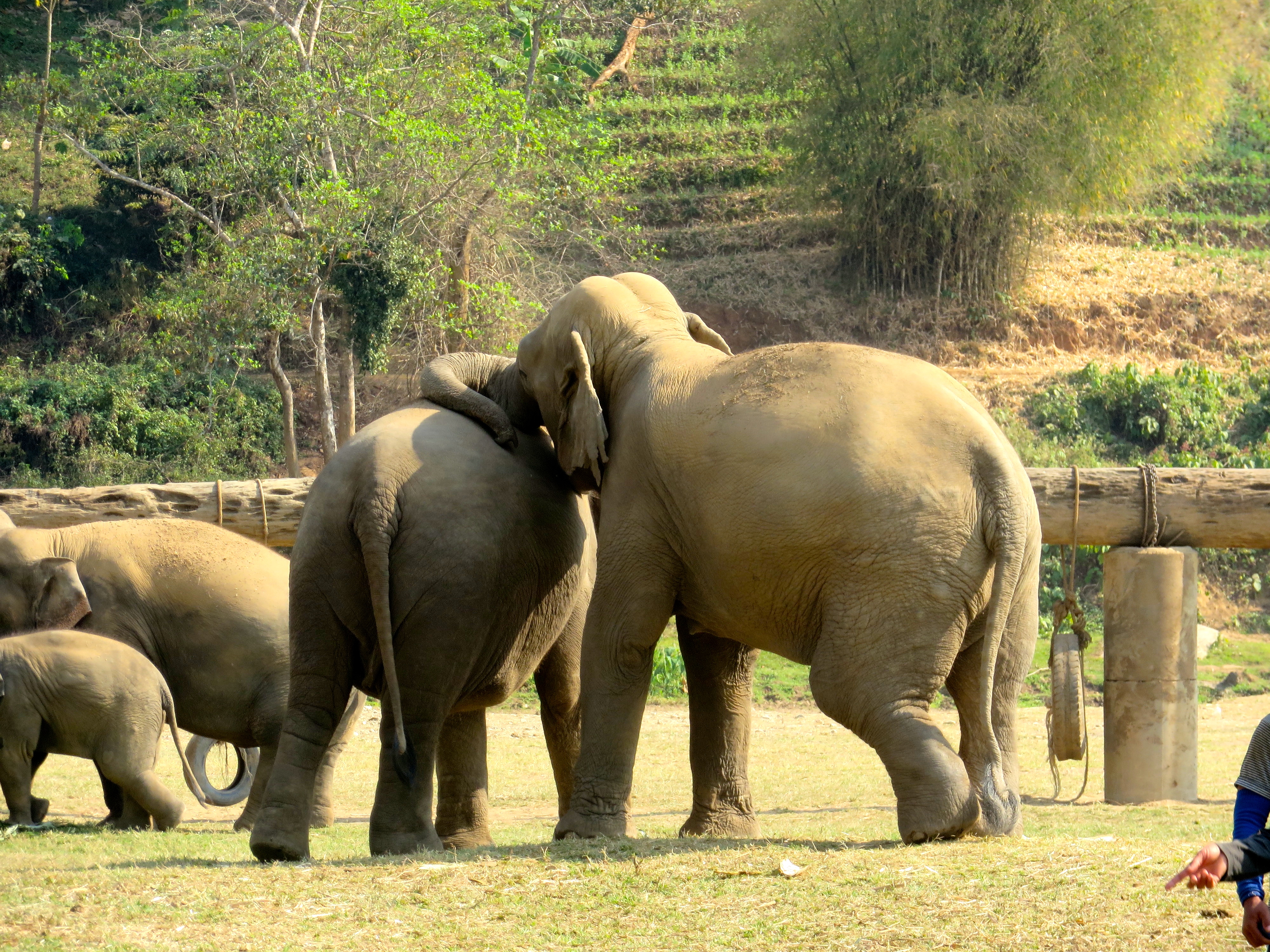 It took me a long time to write this post. The exploitation of animals, especially elephants is something I am very passionate about and anyone who knows me personally, knows that I can be very opinionated and stubborn about things I feel strongly about.

However at the same time I know many people that have jumped on the back of an elephant while in South East Asia and not thought twice about it. I am very conscious about stepping on any toes when it comes to writing this post.

First things first- I don’t blame anyone who has ridden an Elephant. 9 times out of 10 people are largely misinformed about the cruel and exploitative life of the working elephant in Thailand. They make presumptions that the elephants are well cared for, that they are bigger than a horse thus it can’t possibly hurt them if I jump on their back.

Unfortunately those presumptions are incorrect. Thus the point of this post isn’t to lay blame, but to inform, so hopefully on your next or first trip to Thailand or other parts of SE Asia you can make an informed decision about animal exploitation.

So what do you need to know about the life of the working Asian elephant?

1. It takes a lot of pain to tame an elephant

An elephant is a wild animal- a fact I think a lot of us often forget. A wild animal won’t just let a bunch of tourists jump on their back for no reason- it needs to be tamed into accepting ‘passengers’.

I’m sure many tourists imagine a scenario where elephants are tamed by being brought up around humans, or in the same way we tame horses. The same story is also fed to them at the Tiger temples which drug tigers so you can ‘cuddle with them’ (hint- don’t do that either). Unfortunately this couldn’t be further from the truth.

In Thailand and in neighbouring countries like Burma where many riding elephants come from, elephants are tamed using an ancient practice that roughly translates to ‘breaking the spirit’ or ‘elephant crushing’. Around the age of 3 and 4 elephants are first separated from their mother and immediately put in a bamboo cage hardly bigger than them called a ‘training crush’.

They are kept in this tight confinement from 3-7 days depending on how long they take to tame- male elephants usually take much longer. While in the crush, they are beaten and whipped.

The locals use sticks with nails on the end to poke their feet and ears- the most sensitive part of the elephant’s body. This is all combined with food and sleep deprivation. This is an extremely painful form of torture.

For more information you can watch this video- (TRIGGER WARNING) https://www.youtube.com/watch?v=yOdsReg20u4

It’s extremely graphic, awful and confronting. We were shown a similar video at the Elephant Nature Park and it reduced most of us to tears and made us feel physically ill.

Ok, so they are tortured at a very young age. Surely they must be happy now that they are 60 years old- they probably don’t even remember that terrible ordeal. Right?

Have you ever heard the saying ‘the memory of an elephant’? Elephants have an extremely good memory- better than you or I do.

At the Elephant Nature Park the elephants will make their own way to the feeding platform at the same time everyday- that’s how amazing their memory is- especially for an animal.

I think we would like to think that they have forgotten those traumatic days in the training crush- unfortunately it’s not true. Elephants remember everything- even from a young age.

An elephant is an extremely large animal- surely it can’t hurt it to have little ole me on its back? This is again incorrect.

The majority of an elephant’s strength is in its trunk- they were never meant to carry weight on their back as they use their trunk to gather and eat food.

Having tourists on their back causes physical damage to the elephant, especially given the number of tourists one elephant is carrying a day in many of the major elephant camps.

The harnesses that they use to attach people carriers onto their back cause chafing and more physical pain.

Many elephants are controlled using a bull hook inserted into their head.

When they are in a training crush, elephants are taught to associate having someone on their back with the physical pain of being stabbed in the ears and the feet repeatedly if they do not obey. Thus elephant trekking often produces mental anguish in the animals along with the physical pain.

4. Many camps are badly run and mahouts can be cruel

The relationship between an elephant and mahout is meant to be a special kind of friendship. At the Elephant Nature Park the mahouts spend all with their elephant and you can see the tender care between them.

When an Elephant passes away at the park, the mahout is devastated. Unfortunately this is not correct for many of the trekking companies in Thailand.

We heard lots of painful stories about the horrific lives of the elephants who have been rescued and brought to the Elephant Nature Park. For example one elephant was blind because her mahout stabbed her eyes out after she refused to work following the death of her baby.

It is very common practice for a mother elephant not to even have a day off from work after the birth of the elephant. She has the baby and then she is ready to work again the next day.

Further, elephants need a lot of food to eat properly- they roughly will eat between 90-240kgs of food per day and drink around 200 litres of water. A lot of the elephant camps just don’t have those kind of resources- and even if they did food deprivation is a very efficient way to keep elephants tame.

I’ll admit, some camps and companies are better than others- but unfortunately given the facts mentioned above even an elephant in the most humane trekking camp in Thailand has still gone through the training crush and is still going through the regular pain of carrying tourists.

Not to mention for every ‘humane’ camp there are 100 cruel ones.

5. The elephants wouldn’t have survived after logging was banned in Thailand without the support of the tourist industry?

This is a very common argument and one that is perpetuated in many of the elephant camps in Thailand. Whilst it is true that many old logging elephants entered the tourist trekking industry after they were out of a job- it doesn’t hold that riding them is the only way money could be raised to support the elephants.

Firstly- the demand for trekking elephants has now exceeded the amount of leftover logging elephants. Elephants are every day being smuggled in from neighbouring countries- especially Burma for the trekking and tourism industries.

Without trekking and with the strict regulation of the Thai government, many believe a new ‘eco friendly’ market would be open in which tourists pay to observe Elephants in their natural environment, to feed them and to bathe them.

This would help to support the older already tame elephants that unfortunately couldn’t avoid the training crush. A ban on taming new elephants as well as less demand from us tourists would hopefully reduce illegal crushing to the bare minimum.

The growing popularity of places such as Elephant Nature Park demonstrate that this would be a great solution!

6. Thai people are poor- shouldn’t we support them, even if it is at the expense of the Elephant?

The majority of money you spend on elephant trekking is going straight into the pockets of the rich camp owners. The mahout himself would only be getting a small stipend for his work and is probably getting exploited just as much as the poor elephant he keeps.

Moreover, the eco industry mentioned above would still provide jobs for Thai people. The Elephant Nature Park employs over a hundred local people and outside of the volunteers who pay to work in the park, the personnel is almost exclusively Thai.

Lek, the owner of the park has also organised things like clothes donations to local tribes, and provides food and board, along with a wage for the native tribal people she employs and their families.

Located just outside of Chiang Mai the Elephant Nature Park is home to over 37 rescued elephants, including 5 young elephants that were born in the park.

Here the elephants have a large area of jungle to roam, as much food as they need, the medical support needed for many of their ailments caused by previous exploitation and a large river to wash and play around in. The owner Lek calls it Elephant Heaven.

It’s amazing to see the elephants adapting back into their more natural environment- just like in the wild the elephants have formed ‘herds’ or ‘families’. Just like in the wild we were warned to stay away from the families with young babies as they were especially overprotective of these. We also couldn’t go anywhere near the ones born in the park as they are fully wild and have never had their spirits crushed.

At the ENP we were able to feed the elephants, observe them in their nature environment and even have a bit of a cuddle with the tamer, older elephants like this beautiful girl.

However the highlight of the day was getting into the river and bathing an elephant by throwing buckets of water on her. She was sitting there enjoying a big basketful of fruit while we threw water on her. Elephants love bathing and getting wet and I think us being her servant and helping her have a bathe is a much better balance of power than her carrying us on her back.

There are even a heap of rescued dogs and buffalo at the park as well!

We can honestly say that we would not have gotten anymore out of our elephant experience by jumping on their back. Who needs to cause them pain when you can observe them in their natural environment like this?

A single day visit will cost you 2500thai, around $100. You can also purchase special visit tickets, overnight visits or even stay and volunteer from 1-6 weeks. This was a cost we were happy to bear as we knew our ticket was going straight back into providing for the elephants and supporting the park and the amazing people that work in it.

Now that you are informed, whether you ride an elephant or not on your next trip to South East Asia is now a question of your morality. Is the benefit of me riding this elephant worth the painful consequences for it?- is the question you need to ask yourself.

For some of you the answer may be yes but I really hope this post has at least persuaded even one of you to book a trip to the ENP or similar instead!